One of our very first blog posts was a breakdown of last years Perry Roubaix gravel ride in the lovely Willamette Valley. Well, it's back! It took more than Snowpocalypse 2014 to stop it, though it did force a 2 week postponement. It was worth the wait however, as the weather turned out to be as good as one can hope for in Western Oregon in February.
Team Metropolis rolled out with a good size group, including some of the usual suspects as well as some new faces. Repeat offenders included the Mayor (yours truly) the Utard, Lil' Snacky, D-Bone and the Schwartz; as well as recent additions Shriner (he neglected to wear his fez) and Ulander, who brought a special top secret guest who I don't know well enough to give a juvenile nickname to.

Lil' Snacky and the Utard were planning on using this as an early shakedown ride for the Oregon Outback, so they were riding their respective off road touring rigs (see in foreground above ). The rest of us were riding a mix of cyclocross, touring, road and randonneur bikes.
The weather was promising on the drive down, but we ran into a thick fog bank a few miles from the start. We battled the fog for the first ten or so miles before breaking out into more typical Oregon cloudy skies.

The route is a big loop, and does a good job of avoiding towns and busy roads; though you are never far from homes and farms. Surface is probably 60-70% gravel with the rest paved.
There were approximately 60 to 80 riders at the start line. A few (including Jonathan Maus of Bikeportland.org) had ridden down from Portland. The rest of us were either not that tough or not that stupid, depending on your perspective. 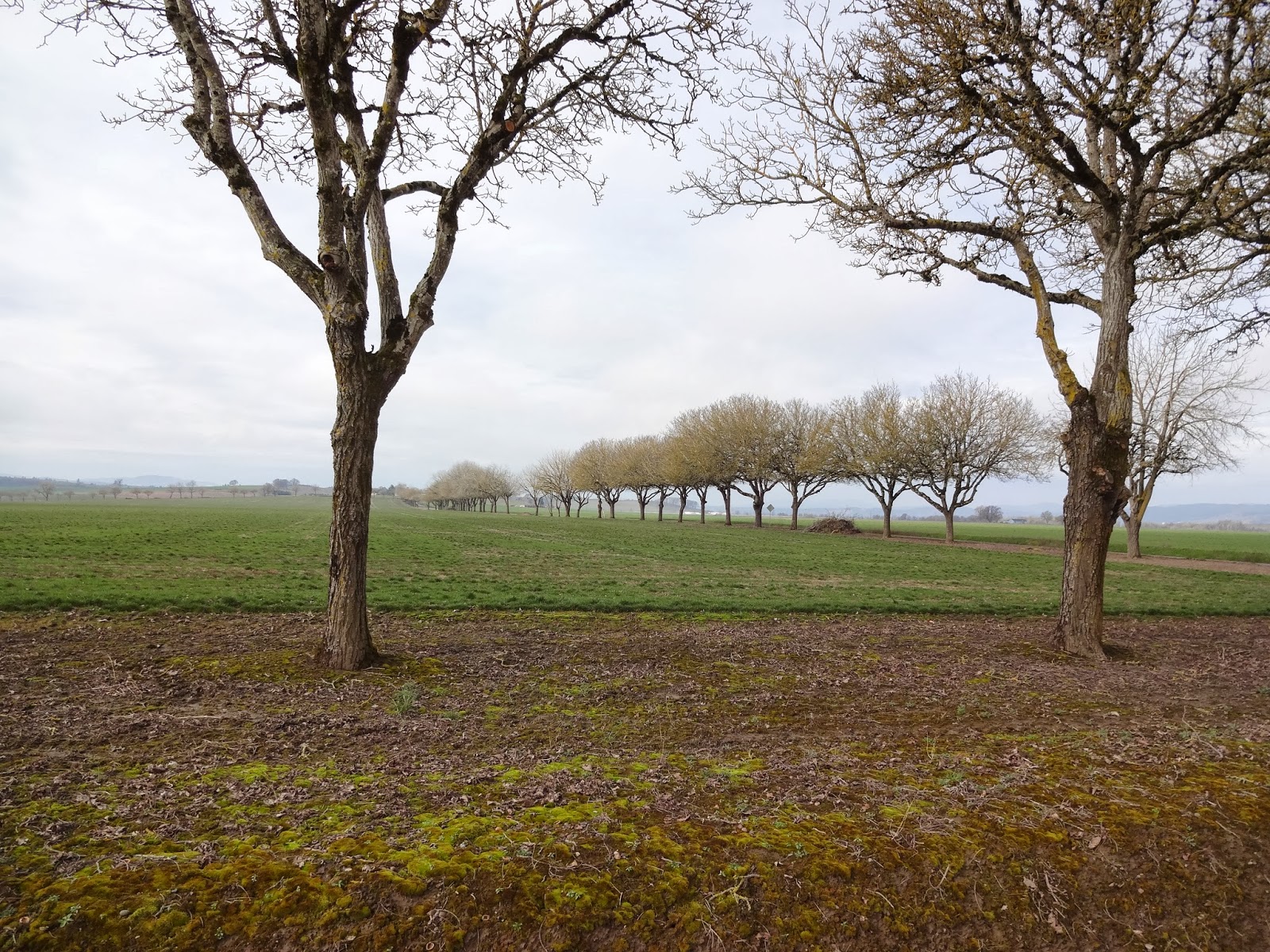 Fortunately, the weather held up until the bitter end and the sun even made a brief appearance.
All in all, a good way to spend a February day. Beats doing yard work.

Posted by Nathan Roll at 9:54 PM No comments:


Last Sunday Team Metropolis attended (and some of us actually participated in) the second Alley 'Cross race of the fall 2013 season at Overlook Park in North Portland.  What's this Alley 'Cross thing you ask? Well, it's sort of a hybrid of a standard alley cat race and a regular cyclocross race. It starts with the entire field (there is only one category) putting their bikes in a designated start location, then convening a short distance away to receive instructions.

In this case those instructions were "go to the Dog Bowl". You may not know it by that name, but the Dog Bowl is the unofficial dog park located off N Willamette Ave between approximately Killingsworth and Ainsworth, where the road makes a big curve above a sizable depression in the bluffs below. There the racers would receive the location of the actual "cross" part of the race, where they were to do 4 laps of the course and return to the start, which in this case, would also act as the finish.
But first, the racers need to get to their bikes. It's common in many alley cat races to utilize a "Le Mans start" named after the French automobile race. This means at the "go" signal, the racers run the short distance to their bikes (or cars) and mount up before starting the course. It makes for an exciting though unpredictable start to to the event.
Sadly, I had more pressing concerns after the race start and was unable to participate or spectate further. I am told good times were had by all. Part of the fun lies in the fact that there is no designated course, and racers are required to rely on their knowledge of the city streets as much as their speed and bike handling skills.
Alley Cross 3 is scheduled for January 11th, at Creston Park in South East Portland. for details check out their Facebook page.
Thanks to Kristina Nash for the photos.
Posted by Nathan Roll at 4:33 PM No comments:

Sorry I dropped the ball on the blogular activities back in October, but I'm gonna try to make up for it with some recap posts now.  Let's see where we? Ah, yes. The last race I covered was Heron Lakes, so up next is the 2 day Bend Halloween 'cross extravaganza. Team Metropolis fielded a fairly small contingent, half of whom didn't arrive in time to race on Saturday. I myself had planned to race at least one day, but discovered upon waking on Saturday that I wasn't feeling so hot and bowed out of racing for the weekend. I likewise passed on taking pictures on Saturday, so we'll fast forward to Sunday, which is the costume day anyway.
Cross in Bend is a whole different animal than West of the Cascades. The 'Cross Crusaders did a typically stellar job in designing the course, combining loose off camber, thick grassy sections, deep sand, two runups and a purpose built flyover ramp.

The third race of the 2013 'Cross Crusade took place on October 20th at the Heron Lakes course north of Portland International Raceway. Once again, the day started off foggy and cool, before breaking out into brilliant sunshine. Team Metropolis had a sizable group in the "C"/Clydesdale field and several racers were caught up in a nasty pileup at the start of the first lap where the course took a turn through a long stretch of loose gravel. Young Adriel was one of the casualties.


This was also the driest a PIR course has been in anyone's memory, and it was fast and fun, if a bit sketchy in spots.


We set up camp near the Vault, a large concrete platform about 16 inches high and 8 or 10 feet square. The fiendish minds that design the Crusade courses have long since determined that this makes a perfect barrier, and it has been featured in many races at this course. It's always a great place to spectate, especially since some of the more skilled racers don't dismount at all, but simply ride up and over the impediment.


The other main terrain features are a couple of stretches of off camber terrain on the backside of the only hill on the course. Otherwise, it's mostly flat. Most years, when it's wet, these provide a serious challenge; forcing many riders to dismount. But when it's dry, they are quite rideable.


All in all, another great day of racing!
Posted by Nathan Roll at 5:44 PM No comments:


Hey Gang, sorry we didn't post a recap of the Cross Crusade opener from the Alpenrose Velodrome. We're going to make up for it now with TWO races in one post, both Alpenrose and Rainier High School.

The first race of the 2013 River City Bicycles Cyclocross Crusade dawned cool and foggy over the hills of Southwest Portland and the grounds of the Alpenrose Dairy. Team Metropolis was there bright and early for a long day of racing. We are pretty well represented in most categories, but the bulk of our racers go in the second race, composed of Category 'C' and Clydesdales (racers over 200#). Unfortunately, since most of us were racing, there aren't a lot of pictures of us doing so. The weather had recently turned from very wet to very dry, and the course was in good condition with the exception of some very muddy stretches which dried through the course of the day with the assistance of the sun, which came out in force during the second race.
This was a theme that was to be repeated the  following week at Rainier. 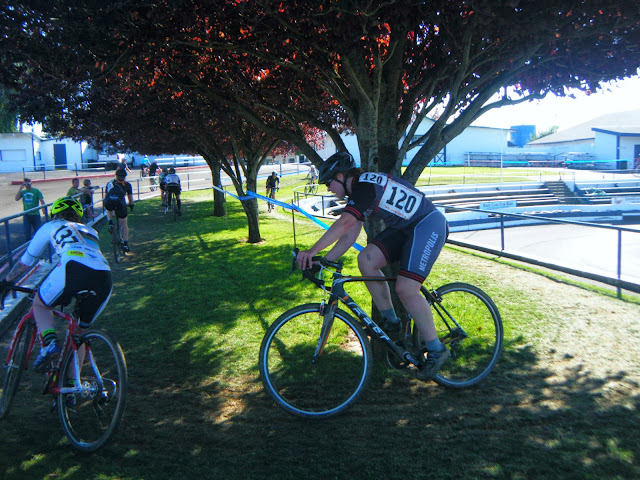 Sunday at Rainier High School started off cloudy and cool. It took a little longer to burn off than the week before, but once it did, it was a beautiful day. I expected the course to be pretty dry, but there were still some severely boggy patches. Rainier's most famous feature is a long and brutal climb, but this year there were many downed trees as well, which the Crusaders worked into the course.
This weekend the Crusade returns to Portland and the Heron Lakes course at Portland International Raceway! Come out and enjoy the sun. Stop by the Team Metropolis tent and enjoy a beer courtesy of our friends at Widmer Bros. Brewing!
Posted by Nathan Roll at 2:47 PM No comments:

It's been a busy summer here at the shop, and I've been a bit remiss in my blogging duties. As we transition into fall, I hope to be able to devote a little more time to the blogular sciences. We're also going to have a lot more subject matter to write about as cyclocross season is here and heating up quickly. The first race of the season was actually August 31st (I know!) and there has been at least one if not two races every weekend since. I myself (along with the Hymanator and Secret Chilidog, with moral support provided by The Schwartz) kicked off the season last Sunday at Fazio Farms. They call it a farm, but it's as much a gravel pit as a farm, with lots of heavy machinery and huge piles of dirt and rock. I didn't have much time for photojournalizing, and I didn't have a real camera, but here are a few cellphone pictures to give you an idea of the majesty of the scene.
The course is in a great location between the Columbia River and the Columbia Slough, just West of the airport. It was an easy 15 minute ride from my house. It featured a mix of fast, flat (though bumpy) dirt and grass stretches and a few short but steep climbs. The main feature was the bomber downhill followed by the uphill to 180 which I referred to as the halfpipe. Holy shit was it fun.
But wait, there's more!
The other main feature was the so-called Dinosaur Back. It was a steep (though rideable) hill with a less dramatic though still fun descent. It's best feature was a sweet berm that funneled you around the hill and into a narrow chute of marshy grass that immediately sapped all your momentum.
All in all, I vote Fazio Farms as most fun cross course ever. And there was free Tecate! 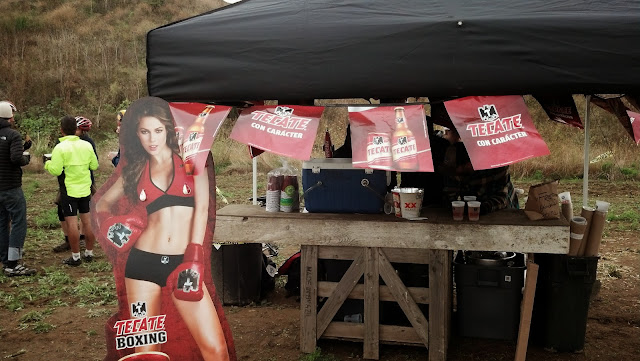 Next weekend you have a choice between Ninkrossi (featuring lots of Ninkasi beer) or the Battle at Barlow (featuring no beer because it's at a high school). For more details check out the OBRA calendar. If Fazio Farms looked like fun, it's coming back for a rematch on November 16th! In 2 weeks shit gets real when the infamous 'Cross Crusade kicks off at the Alpenrose Dairy.
Posted by Nathan Roll at 3:50 PM 2 comments: